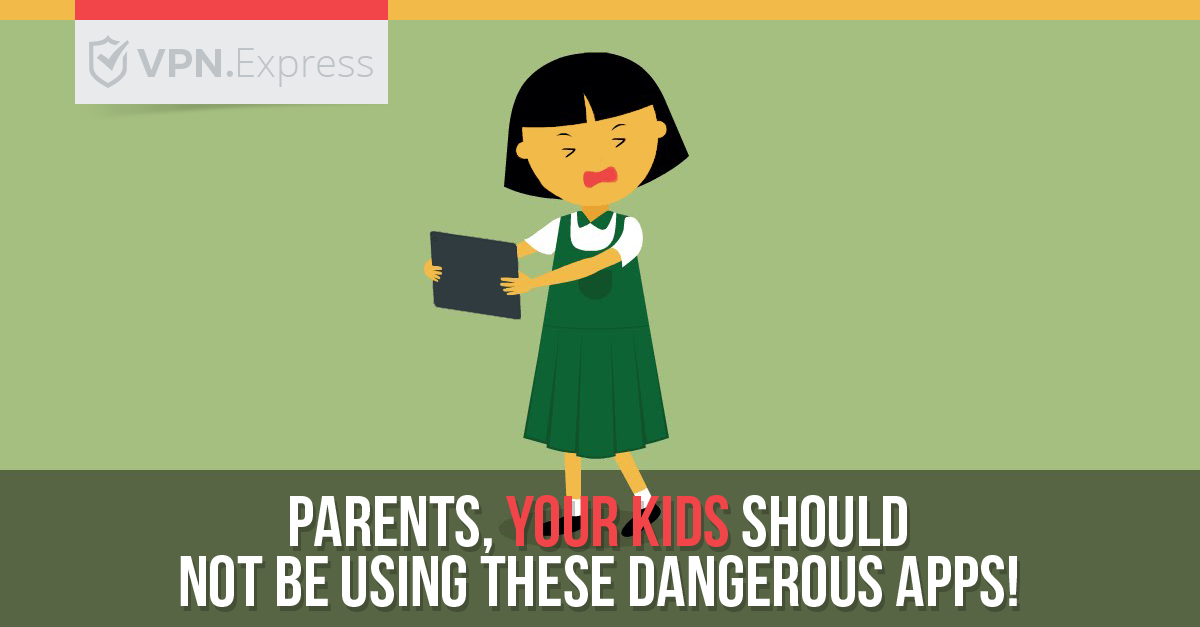 The double-edged sword known as Technology made the whole parenting experience in 21st century more demanding than it was ever before. Of course, we can’t say that everything online is evil, nor does danger lurk behind every new app that comes to market. In fact, technology has helped parents simplify many parenting tasks, and allowed them to accomplish daily tasks with ease and simplicity.

Parents, your kids should not be using these dangerous apps!

However, this technological progress comes with a dark side where your privacy and your kids’ privacy can be easily exposed. Topping the list is the easy accessibility to smart devices and applications, which are exposing kids to growing online threats.

Usually when we discuss the topic of kids and digital threats, we talk about issues like cyber stalking, cyberbullying, online sexual harassments, cat fishing, and so on. Being a parent makes it your number one priority to protect your kids from any kind of creep that could harm the privacy of your kids or even their life, such as online predators, stalkers, harassers, etc.

The first question that comes to your mind as a parent is, where do I start from?

Well, the first step is to talk to your kids about the jeopardy of using some social media apps that are widely used by millions of users worldwide, which can become extremely dangerous if not used with care.

To make things clear, when we describe a social media app as dangerous or unsafe doesn’t mean the app itself is dangerous. What we mean is the abuse of these apps by people with hidden, deadly motives.

When a person abuses any social media app to harass someone else, there is no doubt that he should be blamed and punished for all the right reasons. However, as a parent, it is always your responsibility to protect your kids and teach them not to give the chance to anyone to harass them. Remember, it’s better to be safe than sorry.

The use of these social media apps abusively can allow an individual to hack into your kids’ device and access personal information. It may also lead to a parent’s worst nightmare, as he could easily use these information to stalk your child online, make him/her a victim of cyberbullying, sexual harassment, unethical social engineering, etc.

In fact, it only takes few seconds to find thousands of cases that are linked to the abusive use of social media apps. From young girls who were raped by harassers after luring them away from their homes, to the tragic suicide case of Amanda Todd, a teenager from British Columbia who took a risk while video chatting with a stranger, which gave the opportunity to blackmail her and even publicized her intimate images leading eventually to her death.

So, let’s take a look at some of the most popular social media apps which are consistently abused by cyber villains:

Although the app does destruct the snaps, there is a short window that people may use to take screenshots of the snap and later exploit it. Rather than mention that the app was hacked back in 2014 and a large number of personal photos or snapchats of users were publicized.

Although Whisper keeps the users’ identity anonymous, it does show the location of the area from where the messages are being, which makes as easy as pie for any pervert or online predator to detect the exact location of the victim. In fact, one of the most horrifying cybercrime stories was conducted through this app back in 2013, when a twelve-year-old girl was lured away from home by a 21 year-old-man. Once they met, he took her to a motel and raped her.

To make it even scarier, third party websites allow users to search for people based on things like age and gender. All this, makes Kik messenger the perfect place for cyber stalkers and pedophiles to find their victims.

When you use Omegle, you do not identify yourself through the service. Instead, chat participants are only identifies as “You” and “Stranger” which makes it by default the perfect spot for predators who are after unsuspecting kids.

Tinder allows users to view and “rate” profiles and start communication with people they like. So any child who uses the app will be mostly meeting people who are over legal age, which may easily be a predator, scammer, or any other variety of creeps that no one should have to deal with.

All these apps listed above cannot be blamed for how they are used, after all, a user needs to be smarter than an app. If you think that asking your kids to stop using any app will keep them away from online threats, well think again because you can’t possibly keep them from using the internet in the digital world we’re living in!

The best way to protect your kids and keep them safe is by talking to them frequently about their social lives and well educating them of all the dangers and threats that are associated with the use of these apps.

Remember, your kids’ safety is always your responsibility!