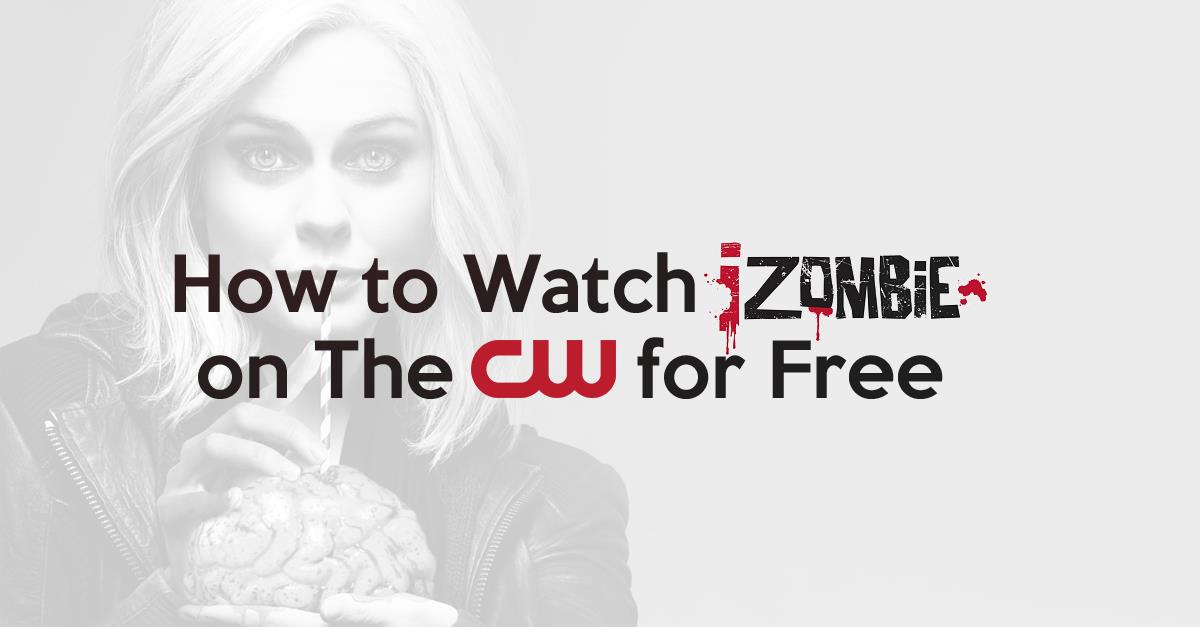 Want to watch the new season of iZombie?

Unless you have been living under a rock recently, you are probably aware of the up-and-coming fourth season of iZombie TV series which is anticipated to start on the Feb 26, 2018.

The comic-book based TV series of the same name which was first premiered on March 17, 2015, features a high-achieving and disciplined medical student that goes by the name of Liv (Rose McIver), that had her life completely turned around after she attended a party that unexpectedly shifted into a zombie feeding insanity. Later, she turned into a half-part zombie.

The show is expected to air by the end of this month, which is certainly great news for the loyal fans of the iZombie TV series, who are patiently waiting for season 4.

This is really exciting news for iZombie fans who have been desperately waiting for season 4. The internet has been echoing with what the show’s fans have to say about the return of iZombie.

So close, you can almost taste it. #iZombie premieres Monday, February 26 at 9/8c on The CW! pic.twitter.com/wJtuKwRctp

The comeback was decided back in May of last year, despite the TV series’ average ratings. The show has witnessed a slump in the ratings in its last few episodes of the 3rd season. No worries though! The new season is certainly going to be compelling and full of events, new characters, and intriguing drama. Things will definitely get interesting, we will see.

What’s in store for Season 4?

The season will start after three months of the Season 3 finale, with Seattle cut up from the rest of the world with the surviving zombies and human beings who live there seeking to calmly co-exist.

However, we now have a release date, and everything else that we can expect to happen in the coming fourth season. The advertised announcement date for the opening episode of season four, named “Are you ready for some zombies?” is only available in the UK. The CW Television Network and Netflix users outside of the UK will unluckily have to wait a little longer until May 2018, and this has frustrated many streamers. But there is a solution around this…

I just watched three seasons of IZombie in three days.
I’m pretty proud of that.

Season 4 of iZombie will be one of the most anticipated TV shows when it airs on February 26, 2018, everyone and his mother will be lying on their couch patiently waiting to watch it – except all those who live outside of the US and UK will be unable to do so.

But if you want a way around this, and no matter where you live in the world, you can stream the newest episodes from the comfort of your own home the second they get released in the UK or the US.

Watch iZombie wherever you are in the world

How can you do that?

In order to be able to watch not only iZombie, but also other popular TV shows on The CW and Netflix—you just need a virtual private network (VPN) that can hide your IP address, change your location, and bypass geo-restrictions.

Unfortunately, many VPN services out there can’t do that due to government restrictions and security issues.

VPNExpress will help you overcome all of these problems, and because we don’t allow your ISP to slow down your connection, you will be able to enjoy blazing-fast streaming experience without any lags or limitations.

Streaming High-Definition (HD) content will be more delightful than ever. As shown above, your Internet Service Provider (ISP) usually tracks the websites you visit, and when they see you trying to stream connection-intensive content, they tend to suppress and throttle your internet connection making it much slower.

We recommend VPNExpress for high-quality and lightning-speed streaming of iZombie Season 4, the instant it becomes available in the UK or the US, you will be able to watch on-demand doing the following:

By hiding your real identity and current location, you will find it extremely straightforward and simple to access any content from any country in the world without any restrictions or censorship whatsoever.

Looking to watch something else? check out this article about the best Netflix shows to watch right now.